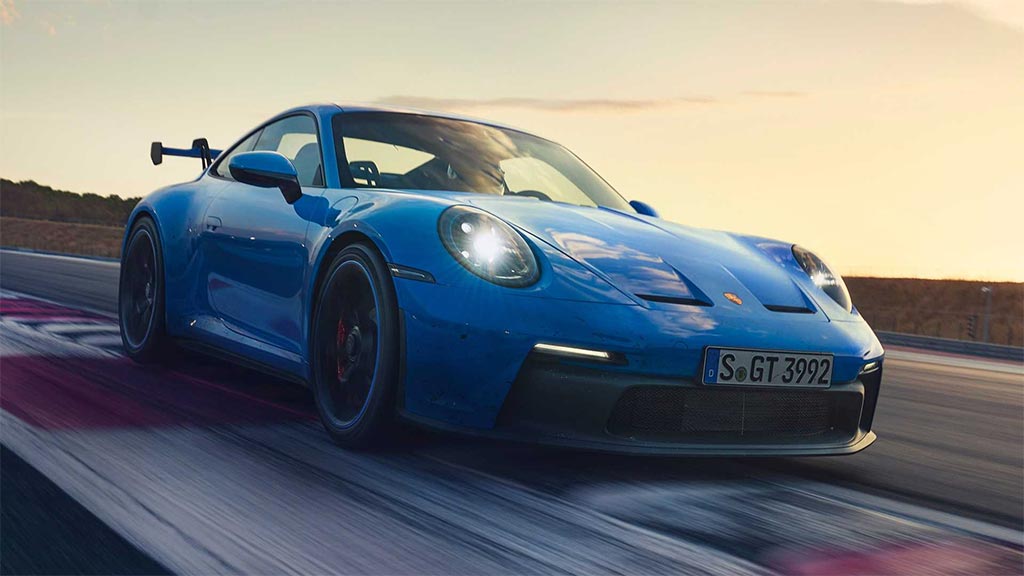 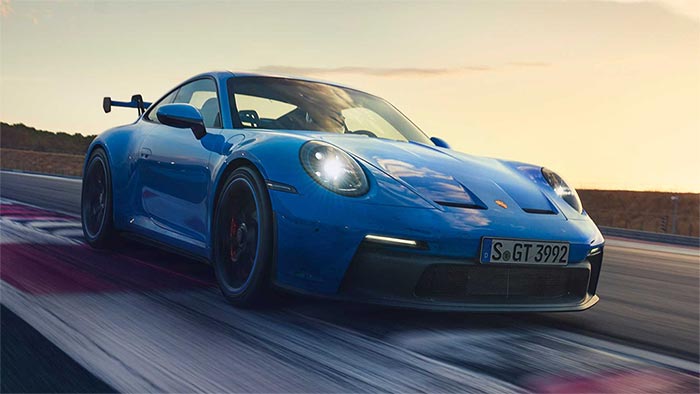 Welcome back to Scouting Report, CorvetteBlogger’s educational column that seeks to help members of the Crossed Flags family get to know their mightiest rivals. In this edition, we will take a look at the first 992-Generation 911 from Porsche’s exemplary GT division.

Want to have some fun with your kid’s orthodontist? Ask them about the 996. The very mention of the 911 that Porsche pushed into showrooms between 1999 and 2005 is enough to send most die-hard fans of the iconic German “cart-before-horse” sports car into a tizzy. The 996 was the first all-new platform in the nameplate’s history, and it was almost universally vilified by long-time devotees. They took issue with the non-circular headlights (which sounds strangely familiar around here!) and bland “bar of soap” styling, but the prime source of their displeasure really boiled down to two significant gripes. The first of these was the loss of the quintessential piece of the 911 driving experience, the air-cooled flat-six. The switch to water-cooling in the 996 and all ensuing 911s is something that people who emphatically pronounce it “Por-shUH” (which is technically correct) still haven’t forgiven. Grievance, the second, lies in the model’s materials, fit, and finish. The 996 was the first car of its line that was built to a price-point instead of the “whatever it takes to get it perfect” mantra that defined prior generations. But it wasn’t all bad; out of this apparent dumpster fire rose a phoenix. 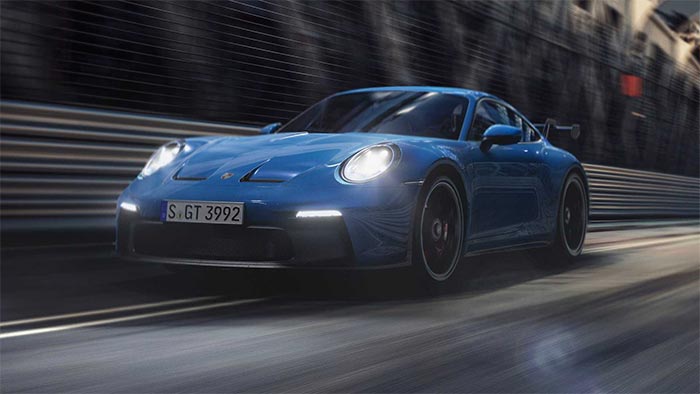 To smooth things over with purists and help homologate the legendary Le Mans-winning “Mezger” motor, Porsche released a stripped-down, hard-core version of the 996 that was completely fixated on satisfying those who love the sensation of driving above all else. The fruits of this project were given the moniker “GT3,” and the road car landscape hasn’t been the same since. Each 911 cohort between that genesis and today has spawned at least one GT3 variant, and while there have been several faster, more powerful, and pricier 911 trim-levels, the GT3 has retained its status as the one that tops every enthusiast’s “want to drive” list. And, on Monday morning, Stuttgart pulled the cover off of the latest rendition of their ultimate masterpiece.

While Hans Mezger’s famed M96/72 boxer engine went out of production a decade ago with the sublime 997.2 GT3 RS 4.0, the heart of the new GT3 remains its biggest selling point. The new six shares its four-liter displacement with the swan song Mezger and produces 502 HP and 346 lb-ft of twist without resorting to any form of forced induction. Like the car it is replacing, the 992 GT3 doesn’t redline until a stratospheric 9,000 RPM. 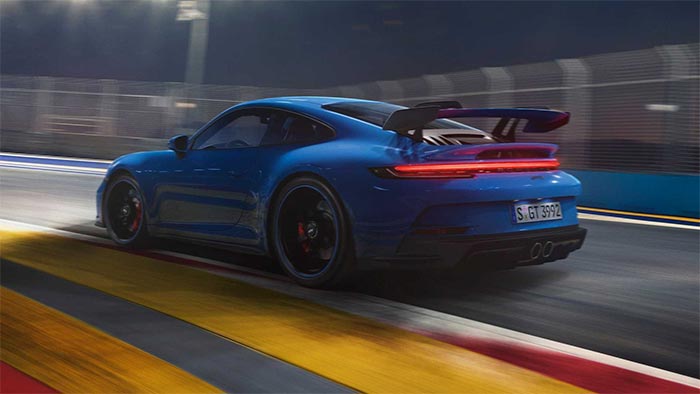 A Focus on Driver Engagement

The emphasis on a purely enjoyable driving experience extends south from the engine compartment to the driveline. Unlike the top-tier Turbo models, the GT3 only sends power to its rear wheels and smiles to its pilot’s face. The GT3 order book defaults to Porsche’s industry-standard PDK seven-speed dual-clutch automatic transmission, but, thanks to the good ol’ US of A, there is a six-speed manual option! 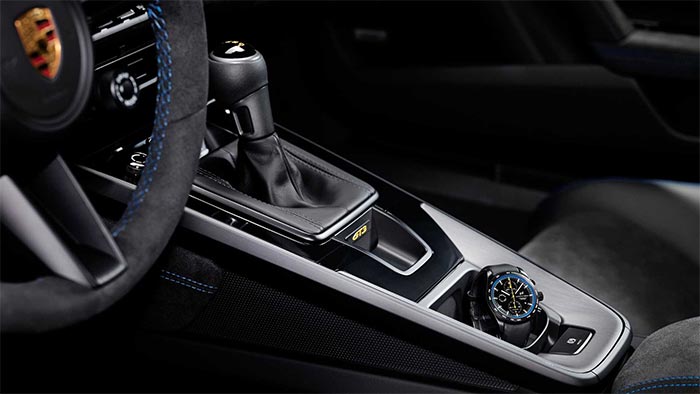 These days it often seems like driver satisfaction, and overall speed are at odds with one another, but the new GT3 seems to be the place where both schools of thought can peacefully abide. Even those who were uninspired by the latest member of the 911 family’s “less than a 2006 Z06” horsepower figure and a torque rating that doesn’t quite measure up to that of a 1997 LS1, the next sentence should put your jaw on the floor. Porsche (a company that is notoriously conservative with their performance assertions) is claiming that their new GT3 will rip to 60 MPH in 3.2 seconds, top out at 197, and stop the clock at the Nürburgring in… wait for it… 6:59.927, besting even the 2019 ZR1 (although we still don’t think Chevrolet gave the 755 HP monster a fair shake at the “Green Hell”)!

The 992 GT3 is the first 911 ever fitted with multilink suspension, which allows for better steering, higher cornering speeds, and reduced susceptibility for mid-corner “surprises” on rough or uneven surfaces, according to Porsche. The standard brakes are bigger than the ones on the last GT3, and ceramic units can be optioned for even stronger stopping and a weight savings of 50%. There is also standard four-wheel steering and an option for R-compound tires (likely the Pilot Sport Cup 2 R that, per Michelin, shaves .8 seconds per lap compared to the “regular” Cup 2 that has become so familiar to Corvette enthusiasts). 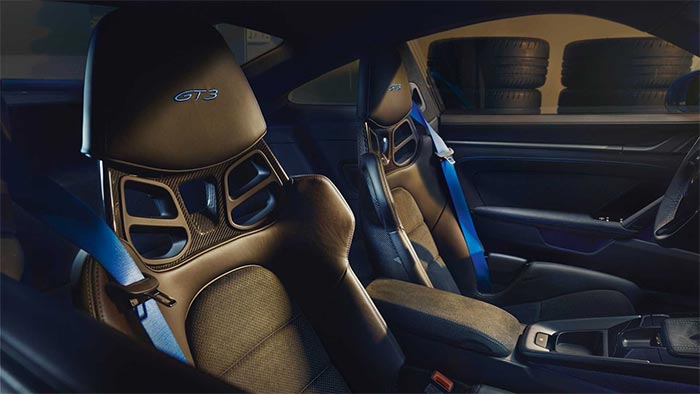 The wing is the GT3’s identifier and conversation piece. New McLaren Senna-like “swan-neck” struts mount to the top of the adjustable wing in the name of aerodynamic efficiency and added downforce vs. a traditionally bottom-mounted wing. Even in the least-aggressive “street” setting, the swan wing brings 50% more downforce than the regular wing on the previous GT3. Move it into attack mode along with the (also adjustable) front lip spoiler, and that number goes up to 150 percent! If you aren’t interested in all of this science stuff, you can order yours sans-wing if you check the box marked GT3 “Touring.”

Uhhhh, we aren’t seeing much to complain about here, but we guess it is kind of a bummer that, like the C8, the new 911 is physically bigger than the car that it replaced. The good news on that front is that Porsche was able to keep weight gain to a minimum in lesser 911s with increased reliance on aluminum, and we wouldn’t expect the GT3 to tip the scales at much more than its predecessor’s svelte 3,116 lbs. Also, while we realize that the GT3 isn’t about stuffing the stat-sheet, a new body style that only receives a two-horse upgrade from the 2018 GT3 (which was only up 25 on the 2015 car) sounds pretty weak. Finally, as with all 911s, the only other real downside can be found in the lower-left corner of the window sticker. Pricing hasn’t been announced, but most are expecting a bare-bones GT3 (an even harder find than a 1LT Stingray!) to command in the neighborhood $175,000 with an options list that could make Jeff Bezos do some soul-searching. 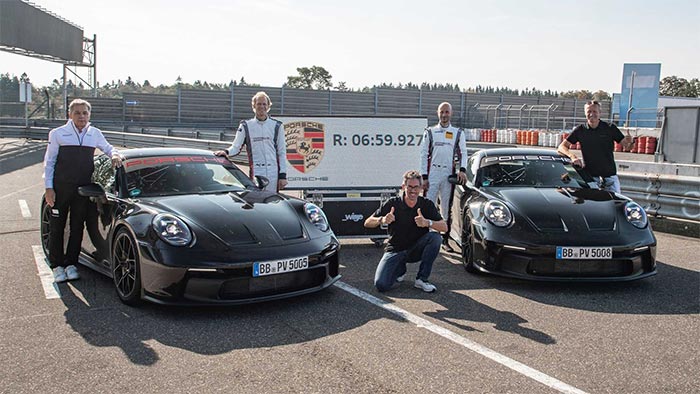 Those hood nostrils! They kept pulling our attention away from the action in the gorgeous B-Roll video posted below. They are the most prominent piece of a design that, while overwhelmingly similar, also strikes us as a lot busier than the 991.2 GT3’s look. We are betting that most people would gladly sacrifice a little subtlety for the upgrade, though!

Overall Threat to the ‘Vette:

This space is supposed to be where our Scouting Report makes good on its sports theme with a final head-to-head comparison between the subject and America’s Sports Car, but this one is special. We don’t actually see this GT3 as a competitor; it is more of a benchmark and even a companion vehicle for the upcoming C8 Z06. The 992 GT3 and similarly high-revving mid-engine Corvette are going to be the one-two punch that enthusiasts will be using to illustrate the “soul” that elevates internal combustion performance cars over their plug-in counterparts (no matter how quick they get) in an ever-electrified vehicle marketplace for decades to come. It is time to admit that the 996-haters have been right all along; the unique experiences offered by the best gas-burning cars can’t be replicated by simply throwing new technology at them. It is the enjoyment of “the drive” that makes the car enthusiast world go-’round, and the best driver’s cars are absolutely worth fighting for!

Photos and Video by Porsche

Chevrolet is Going All-Out for the C8 Corvette Z06