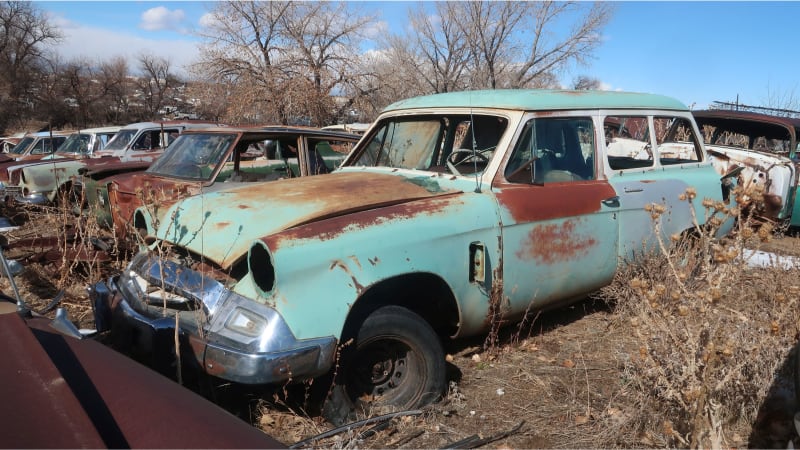 Most of the vehicle graveyards I visit during my pursuit of discarded automotive history are owned by big regional or national chains, which means I see a lot of new inventory with every visit but perhaps not as many really old cars as I’d like to find. For ancient machinery from long-dead marques, your best junkyard choice is an old-time, family-owned business that’s been in the same rural location for many decades. The northeastern region of Colorado between Denver and Cheyenne has many such yards, and that’s where I found this ’55 Studebaker Conestoga. 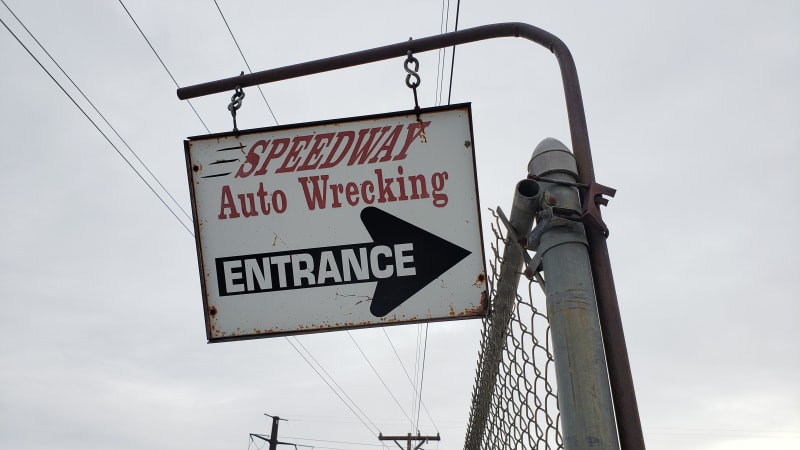 Located in Dacono, about 25 miles north of Denver, Speedway Auto Wrecking specializes in American cars and trucks from the 1940s through the 1980s. They’ve got lots of Corvairs, a big Willys section, and even a well-stocked AMC selection. 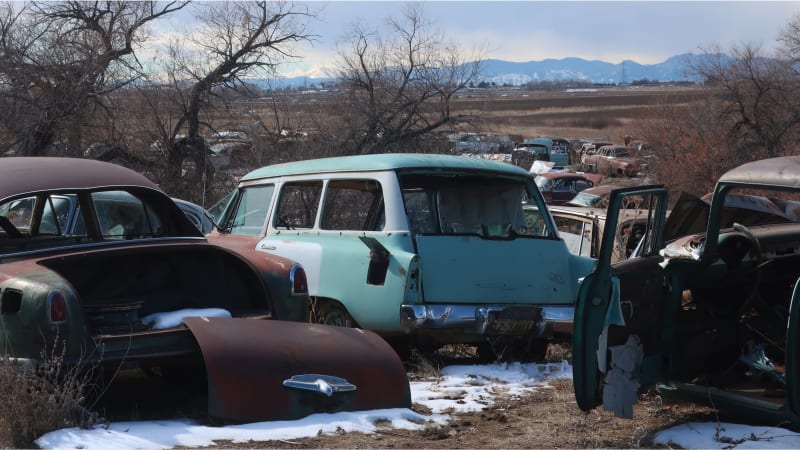 You’ll find just a handful of Studebakers there, but that’s enough for me to make the trip; my selection of junkyard Studebaker photos is lamentably small. To be perfectly honest, I was really there to look for a set of 13″ steel wheels from an early Ford Falcon, so I can have more tire options on my lowrider 1969 Toyota Corona (the Corona uses the same 4×4.5″ wheel bolt pattern as many Fords of the 1960s, and mine has Falcon wheels and dog-dish hubcaps). 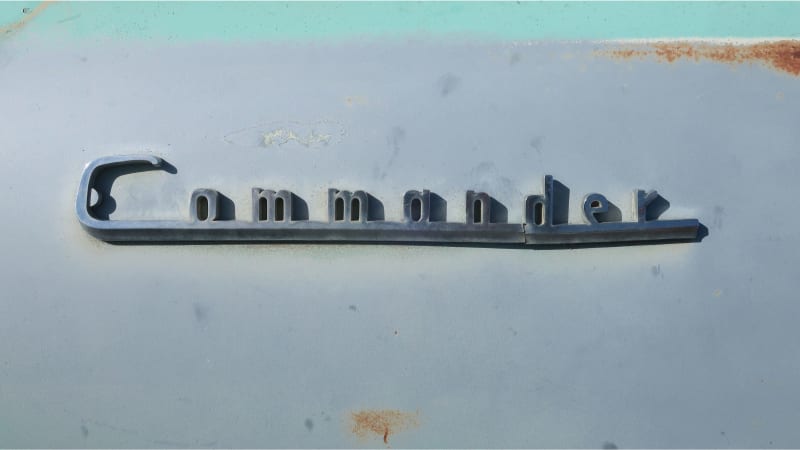 The Commander was the mid-level Studebaker of 1955, fitted between the low-priced Champion and the upscale President. 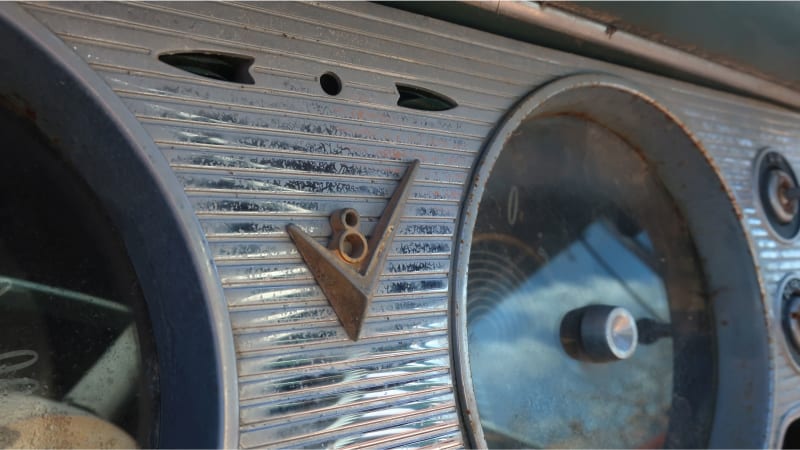 All ’55 Commanders got Studebaker’s 224-cubic-inch (3.7-liter) pushrod V8 engine, rated at 162 gross horsepower. Studebaker had introduced this family of engines back in 1951, after Cadillac and Oldsmobile came out with modern overhead-valve V8s and the same year as the first Chrysler Hemi car engines. 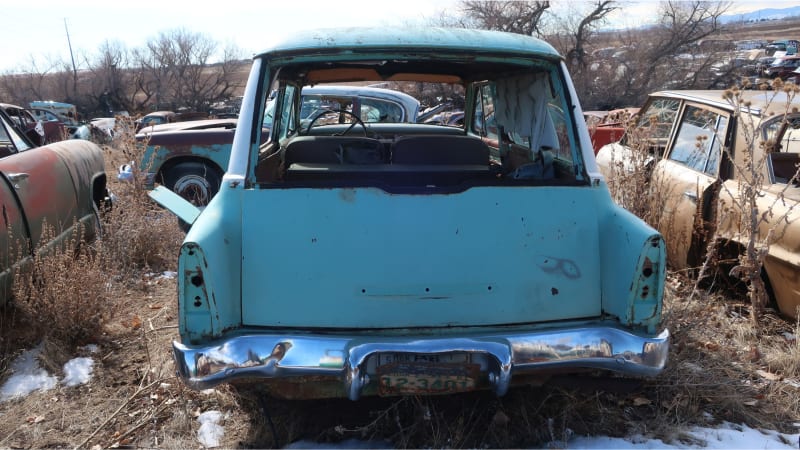 Studebaker wagons of 1954 and 1955 were given the Conestoga name, which sounds hokey until you realize that the Studebaker family started building horse-drawn wagons in South Bend, Indiana, in 1852. Clement Stutenbacker, an immigrant from Solingen, Germany, built his first US-market wagon around 1750, a couple of generations prior to the Anglicizing of the spelling of the family name. If any car company ever had the right to call station wagons whatever they chose, it was Studebaker. 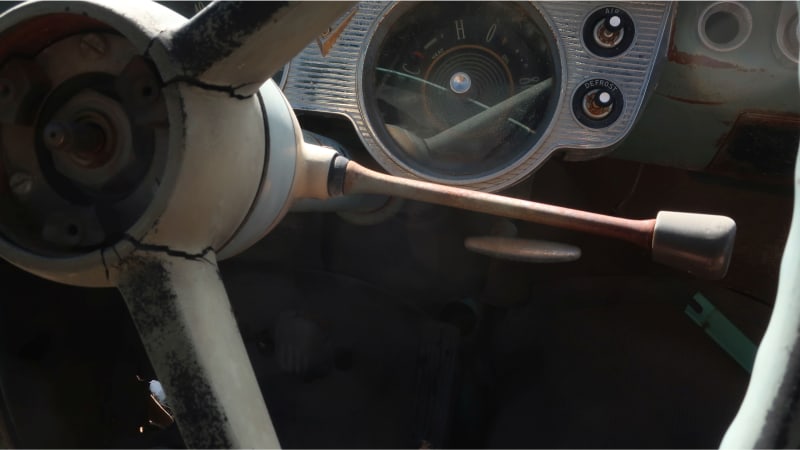 An automatic transmission was available in the ’55 Commander, but it cost a whopping $227 (about $2,225 today). That boosted the price of the $2,274 Commander Conestoga by an additional 10%, so the original buyer of this car stuck with the base transmission: a three-on-the-tree column-shift manual. 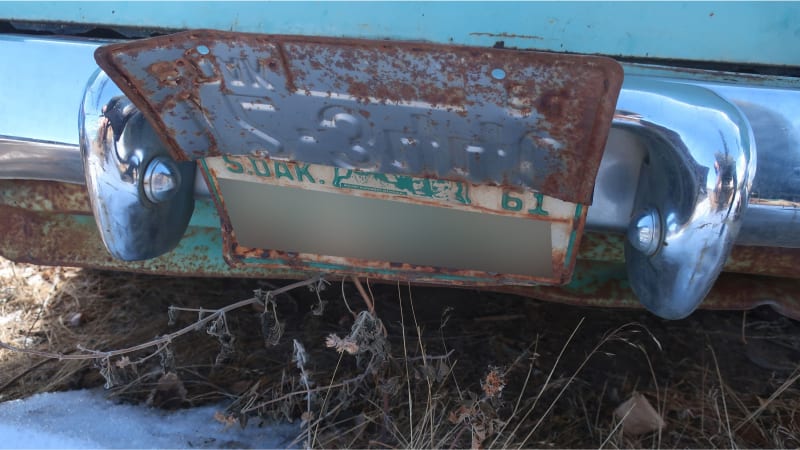 Even though it bears South Dakota license plates (three different early-1960s types stacked atop one another, for reasons I don’t understand), this car isn’t terrifyingly rusty. 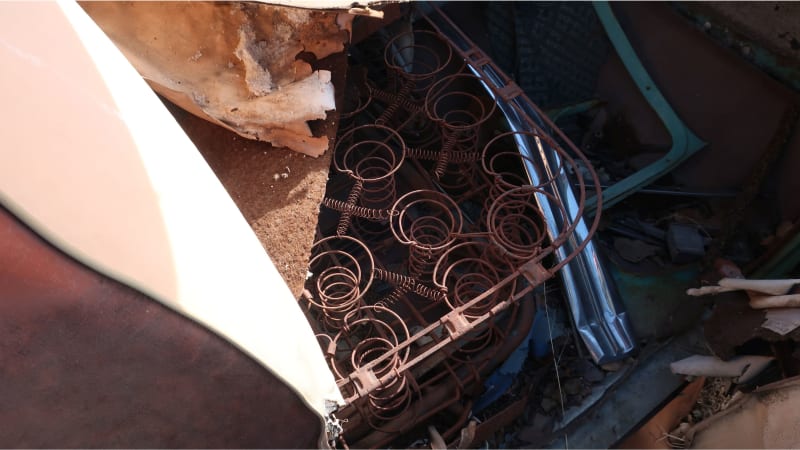 However, the interior had been exposed to the erosive force of the High Plains elements for decades, so it’s thoroughly ickified by now. 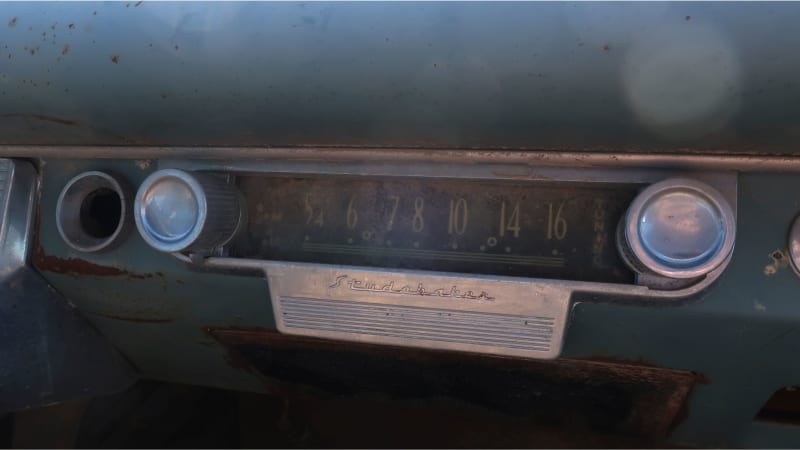 The original Starline 6-tube radio is still inside, and it still shows the markings for the CONELRAD nuclear-attack frequencies. All car radios sold in the United States from the 1953 through the 1963 model years had to have the triangle-in-a-circle Civil Defense symbols marking 640 and 1240 kHz, and you’ll see them in much later cars made by smaller manufacturers using up old radio inventories. Imagine a Conestoga road trip in 1955 South Dakota, with the whole family singing along with Tennessee Ernie Ford’s voice coming from the single speaker of this radio.

Perhaps Studebaker should have hired Tennessee Ernie to compose the songs on their radio commercials.